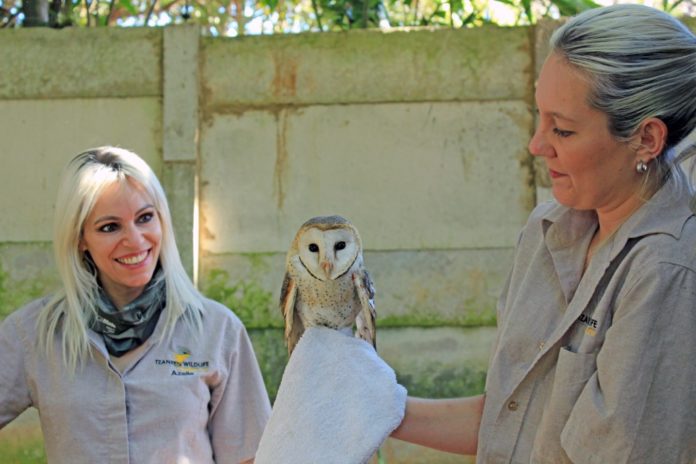 Azelle Grobler and her animals have started moving into their new home at the Sanwild Wildlife Sanctuary outside Gravelotte. The move was mostly down to a lack of space at the Tzaneen Wildlife Rehab Centre in King Edward Street where Grobler was caring for injured and sick animals since time immemorial. Grobler admitted that the current location for Tzaneen Wildlife Rehab Centre was bursting out of it seams and there was a dire need for a larger property to cater for all the animals that continuously landed upon her doorstep.

“We are now located on a few thousand hectares of land which is part of the SanWild Sanctuary in the area of Gravelotte. And the name explains exactly what this facility is all about, a sanctuary dedicated to animals. This land was identified specially to serve as an animal sanctuary. Now the animals can be treated and released right here”, she explained.

Grobler said she could not have done this without the generous support from the community, businesses and friends who have helped her to relocate all the cages and animals safely without so much as batting an eyelid. The move itself, however, was one for the record books. According to our information, if Grobler were to have made several trips to and from the new location, she would have had to apply for special travel permits for each and every person and vehicle involved in the trek. This is why she was advised to involve the local traffic department and travel in convoy.

“I would like to extend a special thank you towards the local traffic department. Without their help to escort the whole entourage of vehicles from Tzaneen to Gravelotte, it would have meant that all the vehicles involved would have had to get a permit to partake in the relocation”, said Grobler.

According to her, about 60 cages and 283 animals were moved to this new location over the weekend. “I am incredibly happy for the animals, they now have a haven, away from people. Aside from the existing facilities available, there is adequate space to expand even further to accommodate more animals in distress.”

This passionate animal lover who grew up among animals as a child on the farm, said what seemed like a one-day task to relocate all the animals eventually took them five days to move. But, in the real world, nothing is perfect or goes according to what a person had in mind. The geyser at the new location of Tzaneen Wildlife Rehabilitation Centre has packed up and needs to be replaced completely.

Grobler said the amount is just short of R8 000 for all the repairs as quoted. She kindly requested for any form of financial assistance to help elevate this burden. Persons who would like to assist in this urgent matter can contact Tzaneen Rehabilitation Centre at 083 273 6793.

Persons or businesses who would like to contribute to this urgent cause can use the following bank account for donations:

Roelof de Jonge - October 26, 2020 0
Nissan launched its new compact SUV, the Magnite, on Wednesday the 21st of October. The new Magnite is according to Nissan a...

Phalaborwa man shoots his wife, her niece and his daughter