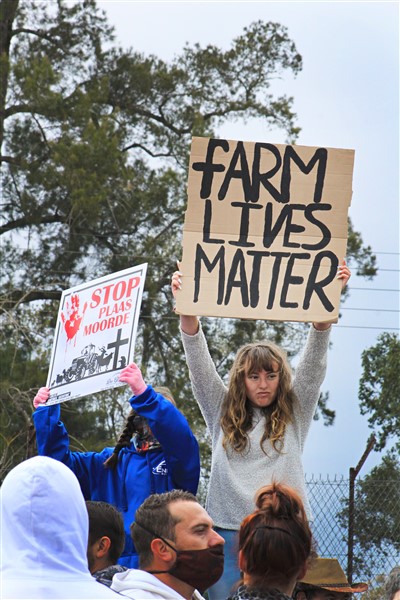 On the 5th of August six armed men entered a farmhouse in Dendron near Bandelierskop. The farmer, Chris Joubert (62) was severely beaten and tied to a chair while his wife Leonise (61) was shot in her leg and brutally raped. His elderly mother, Betsie (98) had a gun shoved into her mouth. She defiantly dared the attackers to shoot her.

This was another farm attack, one of the reported 419 so far this year alone, although the statistics vary because the crimes are not prosecuted as farm attacks, but rather armed robberies.

Following the brutal attack, the gang fled the farm in the couple’s vehicle. They made off with a flat screen television set and two hunting rifles. The police arrested three of the gang members a short while later near Polokwane after a high-speed chase and a shoot-out. One of the three suspects was wounded in the exchange of fire and later succumbed to his injuries.

During the arrest three of the men reportedly escaped. The police recovered five stolen firearms, ammunition, and other stolen items. The two suspects appeared in the Morebeng (Soekmekaar) Magistrate’s court on the 7th of August (last week Friday).

The police spokesperson for the province, Brig Motlafela Mojapelo said in a statement that the suspect who was shot and later died of his wounds, was identified as 33-year old Ayanda Thwanwe from Krugersdorp in Gauteng. The other two arrested suspects are aged 29 and 38. It is reported that a fourth suspect has been arrested in the meantime.

Farmers from across the region as far as Hoedspruit, Mooketsi, Louis Trichardt, Ellisras, Tzaneen and Letsitele stood in protest of farm killings and support for the Joubert-family. Placards bearing slogans in protest of the senseless attacks were brandished by the majority of those in attendance. Bulletin reporter, Roelof de Jonge was in attendance and spoke to some of the farmers.

James van den Bergh, one of the conveners of Friday’s gathering, encouraged the supporters against farm attacks to stay put until the suspect’s court appearance is done. One of the young farmers started playing folk and other popular Afrikaans songs from his bakkie.
“We are gathered here to show our displeasure and frustration with the situation us farmers are dealing with,” said one of the farmers. “But, when we leave here today, all that will remain is a couple of cigarette buts lying around from the people who have smoked. There won’t be any damage to any property.”

Another farmer whom De Jonge interviewed said that the level of brutality that accompanies farm attacks is what separates it from the general murders (which amount to more than 21 000 annually). “Why the need for violence and torture? If these attackers really have a need worth stealing for, at least just leave the people alone in peace. There is no need for this senseless attacks especially on elderly people.”

The case was postponed for further investigation and the suspects will be in court again today (Friday, 14th of August). Bulletin is currently at the scene in Soekmekaar – visit our Facebook page to stay updated with our live feeds from outside the courthouse.

It’s only been three years of inaction…

Chrizelle Dreyer - October 16, 2020 0
Sometimes it is great, and sometimes it is really frustrating because being a human on its own is challenging, now try that...

Joe Dreyer - October 13, 2020 0
Members of the public will be able to apply to lease 700 000 hectares of underutilized or vacant state-owned land in the seven...

The Oracle - October 9, 2020 0
The announcement of the pupil leadership team at Stanford Lake College came after the pupil and staff body voted for the leaders...

Mayor “happy” with only two working toilets at local school