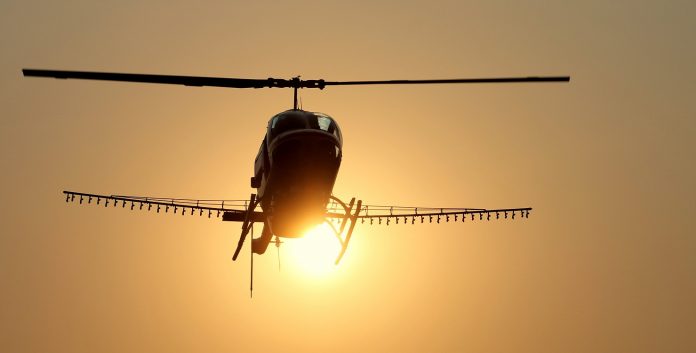 “Basically, I’m still farming, but only from up there,” said Eugene Kalafatis with a bit of a chuckle as he pointed towards the sky. “My roots lie in farming as I’m a mac-farmer myself so I understand the orchards and the struggles that accompany them. The only difference is that my tractor has blades and makes one heck of a noise.”

This interesting analogy is where Kalafatis found the inspiration for naming his company “Heli-Tractor” when he first started two decades ago in 2000. Though his base of operations is situated right in the heart of Kwazulu-Natal’s sugar industry, he has been a regular sight in the lowveld sky for many years. Particularly over the orchards in the Letsitele valley.

What you see when you look overhead at the red and white chopper whizzing by, is something resembling irrigation pipes protruding from the sides of the craft. These are called irrigation rigs and back in the day, Kalafatis was the guy who literally piloted the very first commercial helicopter ag operation in South Africa.

Since then, Heli-Tractor and Kalafatis have grown and their operations expanded to include operations in a wide range of areas, even rhino relocations and firefighting. Just last year, Bulletin reported on a chopper handover at Letaba Fire Prevention Association in which Kalafatis was heavily involved.

“But my big love remains farming, and in particular crop spraying. Which is why I’ve been spending so much time in the skies over your neck of the woods. The system we employ has proven beneficial and cost-effective to the farmers in this area which has led to a higher demand for our services.”

The “system” he referred to is known as electrostatic spraying. It may sound like a mouthful, and if you really dig into the science behind it, it likely is. But the basic concept is one that is rather simple to explain and very easily understood. The conventional spraying methods, especially with a chopper that generates a lot of down winds, results in the chemicals hovering above the trees for a period as gravity pulls them down.

The spray drifts off with the wind before it hits the plant canopy (this is called drift potential). This causes wastage and losses and although the method is not ineffective, and has been used for many years, it is just not as effective as electrostatic.

Electrostatic spray technology was invented in the early 1930’s and the aim was to improve spray deposition on the canopy. It works on the basic law of opposites attract. In layman’s terms, the water droplets (which the pesticide is diluted with) are charged with a positive charge. The Earth is negatively charged and the two attract one another. The water droplets act as a vessel to transport the chemicals to the plant.

With the law of attraction at play, the spray literally drops to the canopy like a blanket without drift and provides exceptional coverage.
Other advantages according to the research conducted on this method of spraying over the last 80 years, is that the size of the droplets can be decreased allowing for a greater surface coverage.

This is the reason that electrostatic techniques are employed in the motor vehicle industry when applying paint to the steel body and chassis of motor vehicles.

“Interesting to note is that because of the charging of the droplets, they don’t just cover the top of the leaf, but actually wrap around the bottom as well.

If you observe the method in action it seems almost unreal as the droplets behave counter to what you would expect them to. As the charged spray droplets reach the target, they induce an opposite charge on the plant, thus activating electrostatic forces and attracting the charged droplets to both the upper and under leaf surfaces.”

In summary
Basically, the long and the short of it is simply that you save time and money using the electrostatic application system because you use less water, but produce six times the amount of droplets providing superior coverage over much larger surface area.

Added to that is a significant decrease in drift potential. For more information on this and other services offered by Kalafatis and his Heli-Tractor team, head on over to their website www.helitractor.co.za