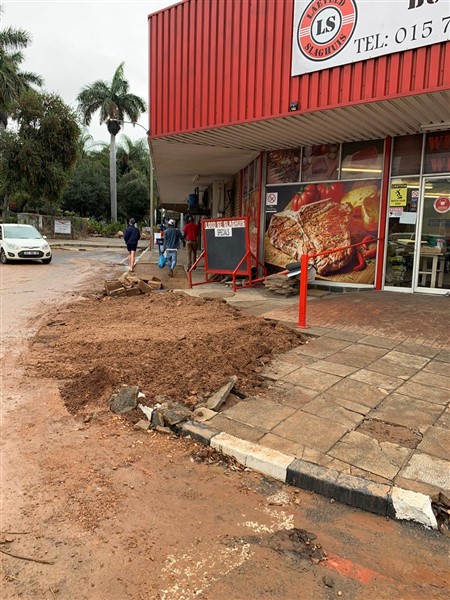 The Ba-Phalaborwa Municipality (BPM) is making it even more difficult for business owners to make a living through their absolute lack of planning, maintenance, and poor workmanship. Two weeks ago the municipality arrived on site outside Laeveld Butchery in the town’s CBD to repair another burst pipe in their outdated and rapidly falling to pieces infrastructure.

The BPM team ripped out the paving bricks right in front of the shop and started digging into the walkway to reveal the burst asbestos pipe. After repairing the pipe, the team left – leaving the butchery shopfront inaccessible from the street with patrons expected to traverse a literal mudslide. The bricks were never packed back into place nor was the rubble removed.

Despite numerous calls and complaints from the owner of the butchery and some members of the community, at the time of going to print the municipality had still not returned to fix their mess.

**Editor’s comment: This is in line with the modus operandi of the BPM who seem to be operating on a reactional policy rather than a preventative one. It would serve them well to budget for a total repair of the entire grid in planned, scheduled intervals which would allow for some form of pre-emptive planning by business and homeowners alike. This municipality’s failure to adequately plan has directly led to residents being left without water for days on end and businesses suffering an income as a result of water shortages and shoddy workmanship as in the case of Laeveld Butchery.

To add insult to injury, the Ba-Phalaborwa municipality informed its residents recently that they have delayed the issuing of billing statements for this month due to ‘technical errors’.

“The municipality’s technical department must improve the standard of workmanship when repairing anything. As a result of poor workmanship in the municipality, the team just closed up the hole with sand on Saturday, to claim overtime, and left it like that,” this is the sentiment of a business owner within the CBD who wished to remain anonymous for fear of reprisal.

On the other hand, Laeveld Butchery owner, Francois Joubert, believed that this incomplete work of the municipality was the new norm and said that if that was the case, he may as well close up shop and migrate to an environment more suitable.

Joubert said the shop had no water for a whole week and that he has had to get water using cannisters from his home to the shop. “What can we say, because when we report our grievances to the municipality, they fix things at their own time,” stated Joubert who is adamant that the walkway is still a construction site and not complete.

“It is a big problem because if you struggle to go inside a shop, you won’t even want to go there in the first place. If you know that people are building on a construction site, you do not even go there because you might even get hurt, and that is the case of this walkway by our shop.”

The Chairperson of the Chamber of Business in Phalaborwa, Manie Kriel, labelled the municipality’s behaviour as nothing short of blasé and hurtful towards the people of the town. “More especially when their actions influence a business negatively! We need a Municipality for the people and not against the people!”

It’s only been three years of inaction…

Chrizelle Dreyer - October 16, 2020 0
Sometimes it is great, and sometimes it is really frustrating because being a human on its own is challenging, now try that...

Joe Dreyer - October 13, 2020 0
Members of the public will be able to apply to lease 700 000 hectares of underutilized or vacant state-owned land in the seven...

The Oracle - October 9, 2020 0
The announcement of the pupil leadership team at Stanford Lake College came after the pupil and staff body voted for the leaders...